The RDVP Server acted as middleman and all worked as hoped.

Only STUN servers were used (the google ones).  No TURN.  Therefore direct peer-to-peer transfer while busting through the LAN NAT.

A special testing webpage was created (served up by the RDVP Server) which allowed step-by-step negotiation.

The step-by-step page was necessary just to work out how the WebRTC handshaking actually worked, since a number of examples found online were difficult to follow.

Video quality was good.  I requested and sent both audio and video streams, however I muted the audio on both ends (in the video tag) so I wouldn't hear any feedback, etc.  Something to test more in the future.

The video stream selected from the laptop defaulted to the primary lid camera, not the USB camera I also have plugged in.  For the phone, it defaulted to the front-facing camera.  Also something to test more in the future.

The webpage is far from a finished product.  It will, however, stay in existence to test out additional features of WebRTC and as a testbed while more featureful libraries are built.

Here are some screenshots.

This is a screenshot of the phone, front facing the screen.  The left side is what my front-facing camera saw, which is my second laptop screen displaying the laptop-side webpage.  The right is what my laptop camera saw (which is me aiming the front of my phone at my screen). 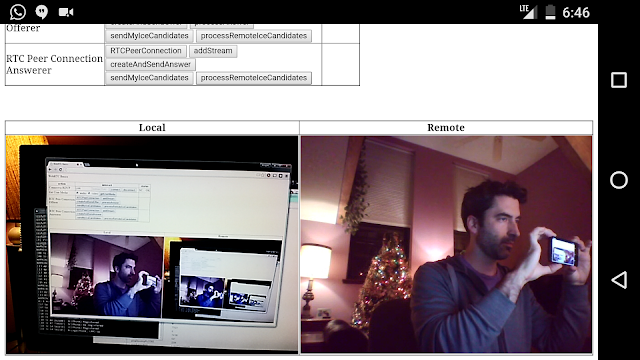 This is also a screenshot of the phone.  This time taking a self-portrait with my laptop in the background. 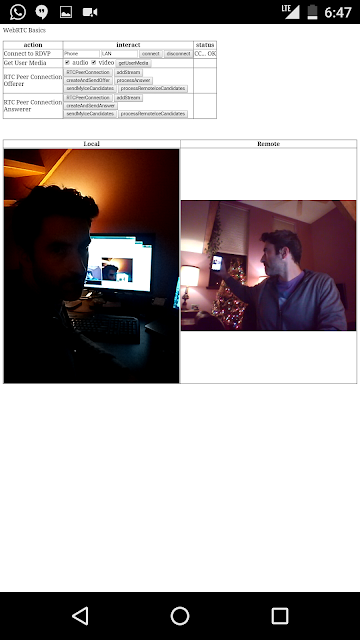 Lastly, here is a screen grab of the chrome webrtc-internals page for the session, on the laptop, keeping stats about received data.  I think this one was for an audio track of the stream, given the low bandwidth (and audioOutputLevel stat). 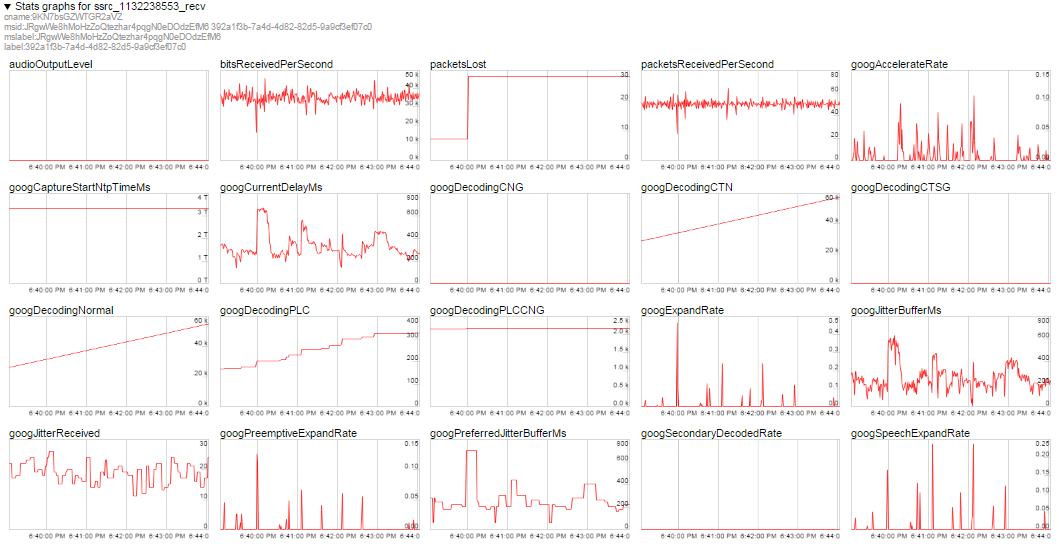 Overall, several megabits of data were being sent out by the laptop to the phone.

The frame rate received on the phone from the laptop wasn't as good as the frame rate in the other direction.

Next up, now that I understand WebRTC handshaking a bit better, time to sniff out the message-passing format that UV4L uses, and set up a connection.