In a prior post (link), I demonstrated a setup which:


I have extended that setup so that now:


The basic network and communication setup didn't change, and and really only required an additional servo for the Y axis, as well as the incorporation of client-side javascript libraries.  The client in this case is Chrome for mobile (Android in my case).

Below I have a few pictures of the setup, some video of the setup in action, and an explanation of how I extended Client-side functionality.

My home-brew tilt-and-pan rig.  Just two servos control it, one for X, one for Y. 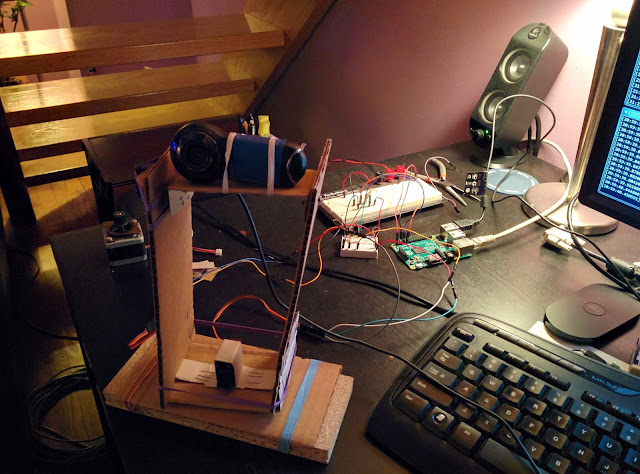 A close-up shot of the Y-axis servo.  Only the highest quality rubber bands and cardboard will do. 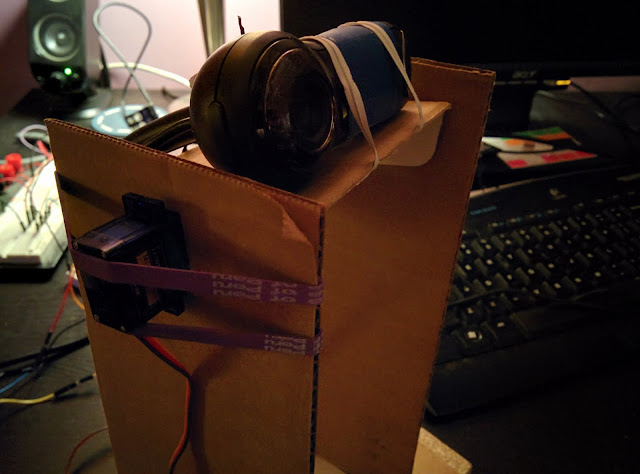 Here is a screenshot of the webpage control.  This happens to be on Desktop for screenshotting.
It's a prototyping page, and so a number of controls are exposed: 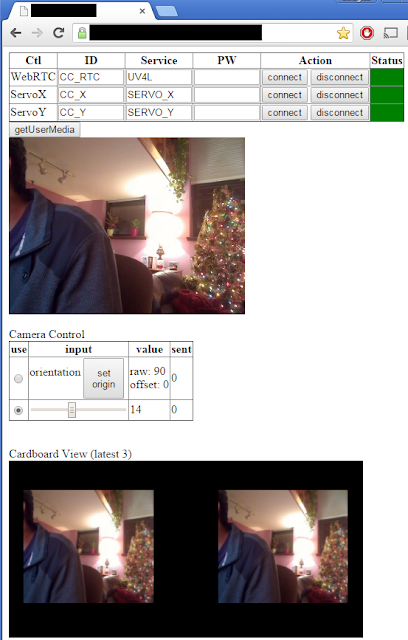 Here is the Cardboard View element full-screen on Chrome on my phone.  It's displaying the WebRTC video feed in a split-screen. 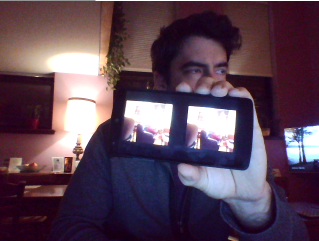 And that view now in my Google Cardboard viewer (ViewMaster). 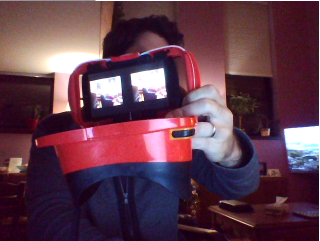 And a close-up of the Google Cardboard viewer once closed up and ready to look at. 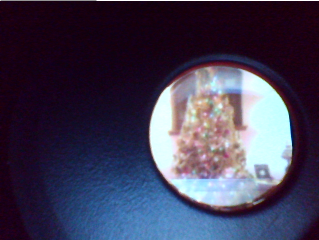 There are a few client-side enhancements that needed to be made to make this possible:

I had played with the Orientation API (link)  as seen around on the web in the past, but found it confusing.  Maybe I'm just not understanding it correctly.

The reason I found it confusing is because the Orientation API is returning Euler Angles (link), which don't directly give me the data I want.  And what it does give me I found difficult to turn into what I want. 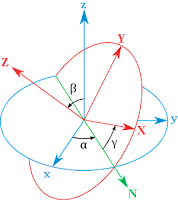 What I really want is to get some readings which are more like what a person would intuitively think of as orientation.

That is, if I'm standing up, and I rotate in-place to the right, that could be expressed as a rotation in positive degrees.  Negative if I turn left.  Let's say that's the X axis.

If I look upward, or downward, that could also be expressed in terms of positive and negative degrees.  Let's say that's the Y axis.

In both cases, I have mapped the Orientation Sensor data to X and Y axis rotations to positive and negative degrees, ranging from 90 to -90 in either direction.  Useful since that's 180 degrees total, which is basically the range of a servo.

The software running on the Pi is a very simple program which expects to be told a number in the range 90 to -90, and map that to the appropriate PWM calls to move the servo to that location.

Getting the Orientation mapping to work was a challenging task for me and involved actually having to leverage some graphics libraries (Three.js) for some conversion away from Euler Angles (which are apparently used in graphics) and subsequently do some trig.  I'm probably doing it wrong.

The Google Cardboard viewer requires a split-screen display with each image aligned to the center of the lens for each eye.

To accomplish this, I additionally use Three.js and its StereoEffect plugin.

The basic application in javascript is:


This leads to a split-screen render where there is a 2D plane which appears to be a video playing in front of each eye.

There are several areas which need to be improved about the whole setup.

This is going to be a combination of several factors, such as:


I will investigate this in a future post.  Latency is not a concern in this prototype but it'd be nice to see where it's all coming from.

It's pretty make-shift at the moment.  A co-worker pointed me at a properly-built tilt-and-pan rig for less than $9 on Deal Extreme (link).  I put in an order and will wait to see how it works.

Not a huge priority actually but probably more stable.  Plus the rig comes with two servos so not bad.